The Fourth Task of the Teacher in the Discipleship process involves developing a deeper understanding of who Jesus Christ is. We need to help people examine the evidence for his deity and his humanity and the meaning of his Resurrection and Ascension.

I. Why We Believe Jesus Christ is God.

#1. The Gospel writers all present Jesus Christ as God.

Jesus’ enemies and skeptics all understood that He went around claiming to the God of the Old Testament writings. Here are some examples:

“And behold, some people brought to him a paralytic, lying on a bed. And when Jesus saw their faith, he said to the paralytic: “Take heart, my son, your sins are forgiven.”

And behold, some of the scribes said to themselves, “This man is blaspheming.”

“And the high priest stood up in the midst and asked Jesus, “Have you no answer to make? What is it that these men testify against you?

But he remained silent and made no answer.

Again the high priest asked him, “Are you the Christ, the Son of the Blessed?”

And Jesus said, “I am, and you will see the Son of Man seated at the right hand of power, and coming with the clouds of heaven.”

“And the high priest tore his garments and said “what further witnesses do we need? You have heard his blasphemy…”

“When day came, the assembly of the elders of the people gathered together; both chief priests and scribes. And they led him away to their council, and they said:

But he said to them, “If I tell you, you will not believe, and if I ask, you will not answer. But from now on the Son of Man shall be seated at the right hand of the power of God.”

“Then they said, “What further testimony do we need? We have heard it ourselves from his own lips.”

The Jews picked up stones again to stone him. Jesus answered them, “I have shown you many good works from the Father, for which of them are you going to stone me?”

The Jews answered him “It is not for a good work that we are going to stone you but for blasphemy, because you, being a man, make yourself God.”

#2. The New Testament letters all present Jesus as God.

Like his enemies, his Jesus’ friends understood Jesus went around claiming to be the God of the Old Testament writings and they believed Jesus was telling the truth.

Here are some examples from the New Testament letters for you.

Here is an example of how Paul described Jesus’ deity:

“But our citizenship is in heaven, and from it we await a Savior, the Lord Jesus Christ” (Philippians 3:20 ESV)

“He is the image of the invisible God, the first born of all creation.” (Colossians 1:18 ESV)

#2. The Letter of Hebrews

Here is an example of how the author of Hebrews described Jesus’ deity:

“He is the radiance of the glory of God and the exact imprint of his nature, and he upholds the universe by the word of his power…” (Hebrews 1:3 ESV)

Here is an example of how James described Jesus’ deity:

“My brothers, show no partiality as you hold the faith in our Lord Jesus Christ, the Lord of glory.” (James 2:1 ESV)

Here is an example of how Peter described Jesus’ deity:

“And after you have suffered a little while, the God of all grace, who has called you to his eternal glory in Christ, will himself restore, confirm, strengthen, and establish you. To him be the dominion forever and ever. Amen.” (1 Peter 5:10-11 ESV)

“And we know that the Son of God has come and has given us understanding, so that we may know him who is true; and we are in him who is true, in his Son Jesus Christ. He is the true God and eternal life.” (1 John 5:20 ESV)

“Grace, mercy and peace will be with us, from God the Father and from Jesus Christ the Father’s Son, in truth and love.” (2 John 3 ESV)

“For certain people have crept in unnoticed long ago were designated for this condemnation, ungodly people, who pervert the grace of our God into sensuality and deny our Master and Lord, Jesus Christ.” (Jude 4 ESV)

#7. The Revelation of John

“And I heard every creature in heaven and on earth and under the earth and in the sea, and all that is in them, saying “To him who sits on the throne and to the Lamb be blessings and honor and glory and might forever and ever! Amen.” (Revelation 5:13 ESV)

II. Why We Believe Jesus Christ is Human.

#1. The Gospel of Matthew tells us that Jesus Christ was born.

“Now the birth of Jesus Christ took place in this way. When his mother Mary had been betrothed to Joseph, before they came together she was found to be child from the Holy Spirit.” (Matthew 1:18 ESV)

#2. The Gospel of Mark tells us that Jesus Christ fell asleep.

“And a great windstorm arose, and the waves were breaking into the boat, so that the boat was already filling. But he was in the stern, asleep on the cushion. And they woke him and said to him, “Teacher do you not care we are perishing?” (Mark 4:37-38 ESV)

#3. The Gospel of Luke tells us that Jesus Christ was hungry.

“And Jesus, full of the Holy Spirit, returned from the Jordan and was led by the Spirit in the wilderness for forty days, being tempted by the devil. And he ate nothing during those days. And when they were ended, he was hungry.” (Luke 4:1-2 ESV)

#4. The Gospel of John tells us that Jesus Christ experienced emotion.

“When Jesus saw her weeping, and the Jews who had come with her also weeping, he was deeply moved in his spirit and greatly troubled. And he said, “Where have you laid him?” They said to him, Lord, come and see. Jesus wept.” (John 11:33-35 ESV)

III. The Resurrection of Jesus Christ

Paul considered the Resurrection to be “of first importance” and so should we if we want to serve the Lord by making disciples.

“The Atonement is the work Christ did in his life and death to earn our salvation.” (Wayne Grudem)

Jesus Christ proved atonement for us. This atonement covers his responsibilities as a prophet, a priest, and a king, and he invites us to share in the work involved in fulfilling those roles in the lives of others.

V. The Ascension of Jesus Christ

“I will tell of the decree: The LORD said to me, “You are my Son; today I have begotten you. Ask of me, and I will make the nations your heritage, and the ends of the earth your possession. You shall break them with a rod of iron and dash them to pieces like a potter’s vessel.” (Psalms 2:7-9 ESV)

“All authority in heaven and on earth has been given to me.” (Matthew 29:18 ESV)

“The one who conquers and who keeps my works until the end, to him I will give authority over the nations, and he will rule them with a rod of iron, as when earthen pots are broken in pieces, even as I myself have received authority from my Father.” (Revelation 2:26-27 ESV)

We need someone in your area to volunteer to take responsibility for helping others learn the five things I have outlined for the Fourth Task of the Teacher. If you want to work on this in your area, chapters 26 through 29 of Wayne Grudem’s book will have more information on these issues that you can share with others.

Here is another book that can help anyone who wants to volunteer for this task.

In The Footsteps of Jesus Book by Bruce Marchiano 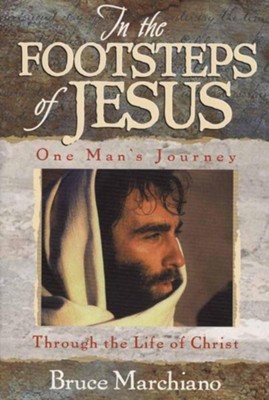